Managing director Grant Anderson stands next to an SUV that has been armoured, showing how all the leather trim and carpet have been added to the armoured cocoon, that now separates the passengers from the load carrying area of the luxury SUV. Picture: Supplied

Johannesburg – They used to be the preserve of presidents, drug barons and maybe tenderpreneurs, but these days armoured vehicles have gone mainstream – in Johannesburg, at least.

You can now literally pop down to the shopping mall, pick up your groceries and pick out the level of the ballistic protection you’d like your new SUV clad in: B4 if your threat is a handgun wielding Rolex thief waiting for you on the way home, or B6 if you fear you might be hemmed in by a gang of AK-47 wielding thugs trying to hijack you.

Whatever the case, you’ve now got options. Grant Anderson has been running his company Armormax in North Riding for the last 12 years, after first being marketing manager of Lamborghini and then general manager of Investment Cars. Before that, he started his career in the retail arms industry.

The confluence of the two: an interest in ballistics and a track record right at the top of the car market, allowed him to help a customer who wanted to armour plate his Lamborghini and Range Rover. One client became two.

Today, more than a decade later, his highly qualified, home grown, armourers have converted hundreds of vehicles for local consumption, Africa and now, increasingly, for export to other high-risk markets like Eastern Europe. The vehicles are mostly SUVs and the majority high end at that – Range Rovers, Land Cruisers, Volvos, BMW X5s, Nissan Patrols, as well as Porsche Cayennes and Bentley Bentaygas.

The company does armour plate luxury sedans, but Anderson prefers SUVs – they’re heavier with greater road clearance, allowing the driver to punch their way out of being hemmed in by other cars and jump the kerb to get away. 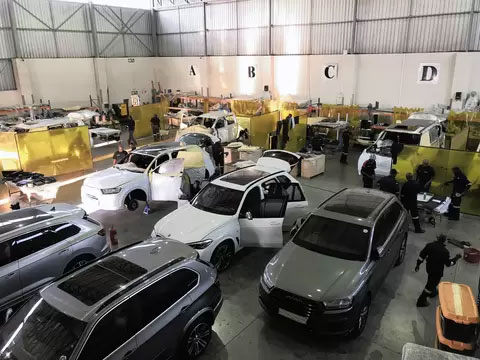 An SUV stripped down, as part of the armouring process, showing the steel cocoon that has been built to separate the back seat from the load carrying area.

The level of protection you get depends on what you need – and what you can afford. Level B4 will protect you against handguns, up to the .44 magnum beloved of Clint Eastwood’s Dirty Harry – even though most of the Rolex snatchers and home invaders will use 9mm parabellum, of which South Africa is unfortunately awash – many, he says, stolen from the South African Police Service.

B4 will add 180kg to the weight of your car, mostly because of the thicker glass that is installed all round, not because of the synthetic armour plate which, although as effective as the plating used on the SANDF’s combat vehicles, is a fraction of the weight. It will take between 15 and 20 working days to fit, and the protections starts at a base cost of R580000

The B6 will add 500kg to the vehicle’s weight, costs from R1.5million and takes 55 working days because the vehicle is gutted at Anderson’s north Joburg factory and rebuilt from the floor up – from blast proof coating to building a ballistic cocoon around the passenger cabin and then meticulously replacing all the leather trim.

Even at 500kg, the armour weight is still less than half to a third of the weight of armoured vehicles produced by the well-known motor manufacturers and well within the Gross Vehicle Mass (GVM) of these vehicles. The much thicker windows are fixed, except for the driver’s which descends to 10cm, enough for documents to be passed through at a police roadblock, but nothing more.

All communication in both B4 and B6 levels is done through a fitted push-to-talk system – with the outside mic and receiver mounted on the underside of the side mirror so that no one has to open their windows in potentially hazardous situations to communicate.

Apart from this, it’s difficult to see that the vehicle is armoured – which is precisely the point says Anderson.

“When we armour a vehicle, it’s important to make it look as normal as possible, otherwise you’re a target.”

It doesn’t make much sense to armour a cheaper SUV, spending three times the purchase price in the process, but he has done it, Anderson concedes, where clients have specifically gone out to use nondescript vehicles in a bid to lower their risk profile.

Confidentiality is a critical part of the business. The vehicles that come in have their number plates taped over. Clients are scheduled so that they never meet each other. When the vehicles are involved in motor accidents or shoot outs, the approved panel beaters either work on site or the vehicle is taken to them, with a company escort while undergoing repairs.

“The competitive edge of having an armoured vehicle is that people mustn’t know you have one,” he says.

The people who have their vehicles armoured are predominantly from Gauteng, Cape Town and, increasingly, Durban, with businesspeople in cash intensive businesses more likely to have the B6 level of protection.

As Anderson puts it: “Certain demographics are perceived as being very wealthy and having cash in hand, while certain communities are more risk averse too.” 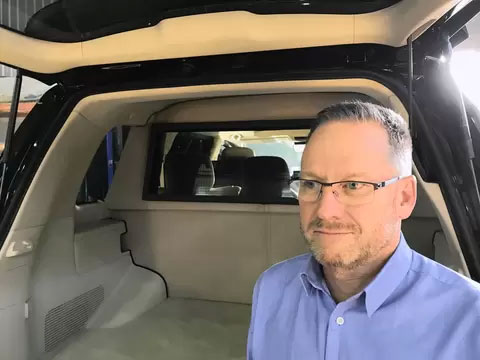 A gutted door that is about to be fitted with armour plating and armoured glass. Picture: Kevin Ritchie

Increasingly though, multinational corporates, with regional offices in south Africa, are insisting that their C-suite executives have ballistic protection on their vehicles. Johannesburg’s crime profile is rated, he says, on a par with Sao Paulo in Brazil. In fact, he believes that the crime levels are worryingly high.

“It’s incredibly dangerous, we’re like frogs – lobsters actually – in a pot of boiling water. It’s so bad that when I went to Iraq on business recently, I was arranging for my insurance and trying to tell my broker, unsuccessfully, that I was actually safer statistically in war zone like Baghdad, than in a place like Joburg.”

South Africa’s crime levels did drop marginally year-on-year, according to the police statistics released last September, but even with that, 45 cars are hijacked every day, 23 of which are in Gauteng. The Global Peace Index ranks South Africa at 125 out of 163 countries, down one position from the year before and lower than neighbours Zimbabwe (124), Lesotho (104), eSwatini (72), Mozambique (86), Namibia (43) and Botswana (29).

It’s not the volume of crime, but the brutality with which it is carried out, says Anderson.

“Crime is increasingly violent and bad, but it’s not being reported anymore. To make the news, it has to be outrageously bad.”

For all that, Anderson describes himself as being very positive about South Africa.

“This is a great country, South Africans are fantastic, you can earn a lot of money if you are prepared to work hard and we still have an incredible lifestyle, but there’s a price to be paid for that, and that’s security.

“I regard myself as incredibly optimistic but, like a lot of other South Africans, I’m putting Plan B in place while hoping that Plan A is going to work out in the end. But it’s because of this that we’re getting this incredible drain on skills.

“What we were trying to say, in Sandton City, is that there is an alternative to emigrating, we can dramatically mitigate your risk, allowing you to live your life without being paranoid.”