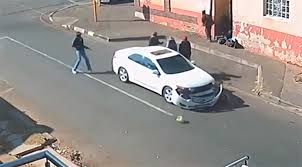 Brixton police are hunting for four armed men in connection with the armed robbery and abduction of a 79-year-old businessman in the area over the weekend.

A fifth suspected attacker was shot in the head and is in hospital under police guard.

After closing his butchery in the Johannesburg CBD on Saturday, the businessman, his daughter and two employees were travelling home when he noticed that five occupants of a Honda sedan were following them.

CCTV footage that emerged appears to show the gang attempting to halt the car before it pulls off heading to Mayfair. The gang then gives chase.

One of the gunshots struck a front wheel, bringing his car to a halt in Mayfair, where they approached the vehicle and demanded cash, Maluleke said. The businessman gave them R5 000.

“They fired several shots in the air, threatening the victim to hand [over] more money which the victim claimed he didn’t have. The suspects then took the victim and shoved him inside their vehicle and fled the scene,” Maluleke said.

The businessman’s daughter and two employees remained in the car.

“Neighbours who witnessed the incident kept on calling the Brixton police station for help. Our members and local security guards responded swiftly to the scene and [details of] the suspects’ vehicle [were] quickly circulated,” Maluleke added.

The attackers drove to Diepkloof Hostel, where they dropped the businessman off and abandoned their car. They fled the area on foot.

Hostel dwellers gave the businessman a cellphone to call his daughter, who alerted police to his whereabouts.

Police rushed to the hostel where they found the injured businessman standing, metres away from the suspects’ getaway vehicle.

“Police then went to the suspects’ car and found one unconscious suspect with a bullet wound in his head. An ambulance was summoned and the suspect was taken to hospital where he remains under police guard,” Maluleke said. It is unclear who shot the fifth suspect.

“Inside the vehicle, we also recovered a firearm and 15 rounds of ammunition that have been taken for ballistics [testing]. Further investigations revealed that the car was wanted in Booysens for an armed robbery matter. We also found a list of business places that had been robbed and others that were going to be robbed in the area,” said Maluleke.

Police are investigating cases of armed robbery, attempted murder, possession of a suspected stolen vehicle and possession of an unlicensed firearm and ammunition.